Tanker and Dry Bulk Markets In Opposite Directions

In its latest weekly report, shipbroker Allied Shipbroking said that “if you were to just look at the graphical interpretations of both the BDI and BDTI indices from Jan ’20 until today, it would be hard to detect any sort of correlated activity between them (or any similarities in terms of momentum) during this time frame. The same goes if you were to use their correlation coefficient. In other words, in the long run, it would be tricky to argue (how and to what extent), how the dry bulk and tanker sectors interact with each other”.

“How about through a time-varying approach, while using different time frames to catch any interrelationship? Periodically, depending on market conditions, we can detect a strong correlation between these markets. So, for portfolio managers, a well-diversified strategy is more challenging and dynamic than one would assume at first sight, especially if you target specific numbers in terms of return and risk parity. TRIX (triple exponential average) is a technical indicator of multiple uses. It is suitable as a metric to find overbought/oversold conditions in the market, as well as, to understand actual trends and momentum in the market when the market’s excess noise is filtered out”, Allied noted. 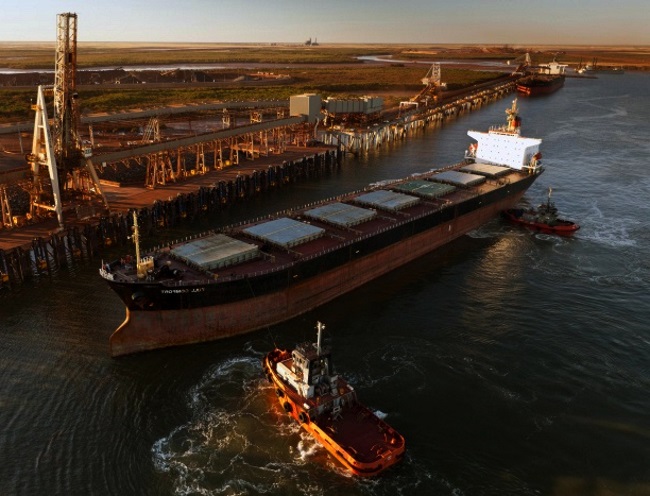 According to the shipbroker’s Research Analyst, Mr. Thomas Chasapis, “having used this oscillator for both the BDI and BDTI indices, the below graph can show many different signals being noted in the market at this point. The BDI has just hit a centerline crossover, indicating a relatively considerable downward pressure present in the dry bulk sector, that can theoretically be translated into a periodical softening of the market. In the tanker sector, the opposite is seen, with the oscillator suggesting that the crude oil freight market is in an “overbought” state”. 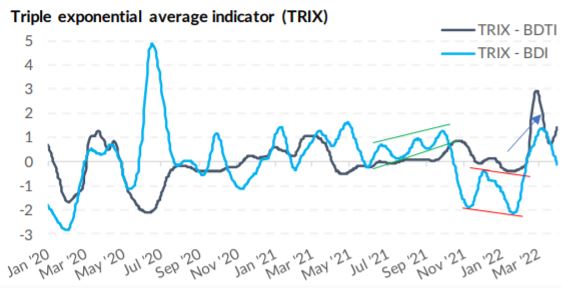 Coming back to the initial point regarding correlation, the interesting angle is how these indicators have responded to each other as of late, rather than point out their individual current direction. We notice, that since Sep ’21, they indicate a similar trend in terms of momentum and temporary divergence, be it either bullish or bearish (with a certain time lag at some points and not necessarily to the same degree). Notwithstanding this, as of late, we see these indicators moving in the opposite directions. It seems as though, for the time being and in terms of momentum, the “combined” market is losing cohesion and seemingly being amidst a considerable shift in the making”, Mr. Chasapis concluded.
Source: Nikos Roussanoglou, Hellenic Shipping News Worldwide