Tanker Premiums To Remain for the Time Being

The surge in rates for Aframax and Suezmax tankers, as a result of the crisis in Ukraine could be the prevailing trend in the market for the near or even mid-term future, given the prevailing geo-political circumstances. In its latest weekly report, shipbroker Allied Shipbroking said that “the recent surge in commodity prices has sparked a whole new trajectory in terms of inflation levels. During the pandemic period, we discussed that the monetary tools used at the time, with the whole purpose to curb the economic (and social) impact of the extended lockdowns across many countries, would not be an easy process, and most importantly, would be at a cost. We also highlighted the perilous path that excessive inflation can have on the global economy”.

According to Mr. Thomas Chasapis, Research Analyst, “now, with a new crisis underway in Europe, the turmoil in the markets is very worrying. How can we avoid a period of stagflation in the market, given that this commodity rally will inevitably translate over to both high inflation and negative pressure in GDP growth levels? Moreover, what will happen with interest rates which is a major tool for central bankers to curb inflation? 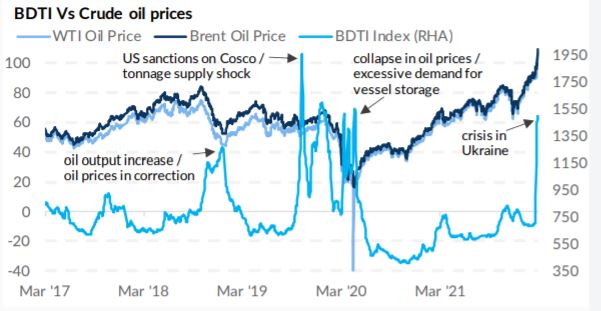 In terms of the shipping markets and more specifically the tanker sector, we have seen a hefty increase in the benchmark figure for the crude oil freight rates (BDTI) during the past couple of weeks. This is but a mere reflection of the current crisis in Ukraine, that immediately resulted in higher premiums for vessels (mostly for Suezmax and Aframax units) that are trading in the region. At the same time, as shown in the graph below, oil prices surged well above the US$ 100/barrel mark, amidst fears of supply chain disruptions due to economic sanctions. It is one of the rare occasions in which we have seen both freight rates and oil prices moving in tandem and in the same direction. Usually, these indices indicate negative correlation when random shocks are applied in the market”.

“Going beyond the current circumstance, it would be interesting to compare the current situation with the freight market regime of the past 5 years and the lack of robustness noted during this period. Did we have periods of firm momentum? From the graph above, only during the latter part of 2018 did we notice a fair progression in the market, that came attuned with the relatively improved fundamentals. Under all other market regimes of periodical extremes, the case was a random shock with a relatively short-term duration. Given the prevailing geo-political circumstances it seems as though these current effects will be able to hold for much longer”, Allied’s analyst concluded.
Source: Nikos Roussanoglou, Hellenic Shipping News Worldwide